Goodbye 2015, Welcome 2016… Happy New Year to everybody. May the Guardian Lion guarding you through the prosperity Year 2016.

Start another photography project for year 2016, hope you all will enjoyed it.

Chinese guardian lions or Imperial guardian lions, traditionally known in Chinese simply as Shi 獅; literally: “lion”, and often called “Foo Dogs” in the West, are a common representation of the lion in pre-modern China.

Statues of guardian lions have traditionally stood in front of Chinese Imperial palaces, Imperial tombs, government offices, temples, and the homes of government officials and the wealthy, from the Han Dynasty (206 BC-AD 220), and were believed to have powerful mythic protective benefits. Pairs of guardian lion statues are still common decorative and symbolic elements at the entrances to restaurants, hotels, supermarkets and other structures, with one sitting on each side of the entrance, in China and in other places around the world where the Chinese people have immigrated and settled, especially in local Chinatowns.

The lions are usually depicted in pairs. When used as statuary the pair would consist of a male leaning his paw upon an embroidered ball (in imperial contexts, representing supremacy over the world) and a female restraining a playful cub that is on its back (representing nurture).

The Asiatic lions were once quite common throughout its historic range in Southwest and Central Asia and are believed to be the ones depicted by the guardian lions in Chinese culture. With increased trade during the Han dynasty and cultural exchanges through the Silk road, lions were introduced into China from the ancient states of Central Asia by peoples of Sogdiana, Samarkand, and the Yuezhi (月氏) in the form of pelts and live tribute, along with stories about them from Buddhist priests and travelers of the time. This exchange can be seen in that the Chinese word for lion is “Shi” (師, later 獅/狮), which shares the same etymological roots as “Shiar”, the Persian language name for the animal.

Several instances of lions as imperial tributes from Central Asia were recorded in the document Book of the Later Han (後漢書) written from 25-220 CE. On one particular event, on the eleventh lunar month of 87 CE, “… an envoy from Parthia offered as tribute a lion and an ostrich” to the Han court. Indeed, the lion was associated by the Han Chinese to earlier venerated creatures of the ancient Chinese, most notably by the monk Huilin (慧琳) who stated that “the mythic suan-ni (狻猊) is actually the lion, coming from the Western Regions” (狻猊即狮子也，出西域).

The Buddhist version of the Lion was originally introduced to Han China as the protector of dharma and these lions have been found in religious art as early as 208 BC. Gradually they were incorporated as guardians of the Chinese Imperial dharm. Lions seemed appropriately regal beasts to guard the emperor’s gates and have been used as such since. There are various styles of guardian lions reflecting influences from different time periods, imperial dynasties, and regions of China. These styles vary in their artistic detail and adornment as well as in the depiction of the lions from fierce to serene.

Although the form of the Chinese guardian lion was quite varied during its early history in China, the appearance, pose, and accessories of the lions eventually became standardized and formalized during the Ming and Qing dynasties into more or less its present form.

By seeing the photo can you tell the guardian lion is a male or female?

Hint: the answer is in the article. 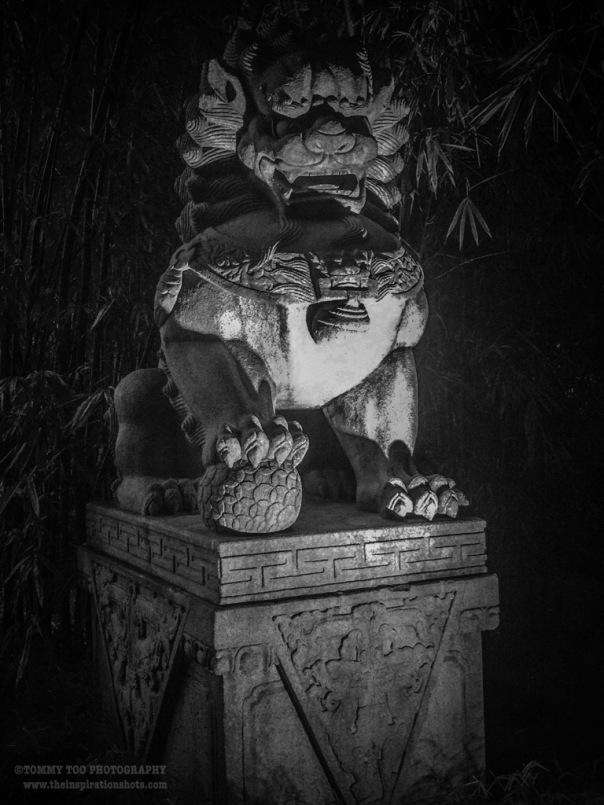