A peasant girl named Karen is adopted by a rich old lady after her mother’s death and grows up vain and spoiled. Before her adoption, Karen had a rough pair of red shoes; now she has her adoptive mother buy her a pair of red shoes fit for a princess. After Karen repeatedly wears them to church, they begin to move by themselves, but she is able to get them off. One day, when her adoptive mother becomes ill, Karen goes to attend a party in her red shoes. A mysterious soldier appears and makes strange remarks about what beautiful dancing shoes Karen has. Soon after, Karen’s shoes begin to move by themselves again, but this time they can’t come off. The shoes continue to dance, night and day, rain or shine, through fields and meadows, and through brambles and briers that tear at Karen’s limbs. She can’t even attend her adoptive mother’s funeral. An angel appears to her, bearing a sword, and condemns her to dance even after she dies, as a warning to vain children everywhere. Karen begs for mercy but the red shoes take her away before she hears the angel’s reply. Karen finds an executioner and asks him to chop off her feet. He does so but the shoes continue to dance, even with Karen’s amputated feet inside them. The executioner gives her a pair of wooden feet and crutches, and teaches her the criminals’ psalm. Thinking that she has suffered enough for the red shoes, Karen decides to go to church so people can see her. Yet her amputated feet, still in the red shoes, dance before her, barring the way. The following Sunday she tries again, thinking she is at least as good as the others in church, but again the dancing red shoes bar the way. Karen gets a job as a maid in the parsonage, but when Sunday comes she dares not go to church. Instead she sits alone at home and prays to God for help. The angel reappears, now bearing a spray of roses, and gives Karen the mercy she asked for: her heart becomes so filled with sunshine, peace, and joy that it bursts. Her soul flies on sunshine to Heaven, where no one mentions the red shoes. 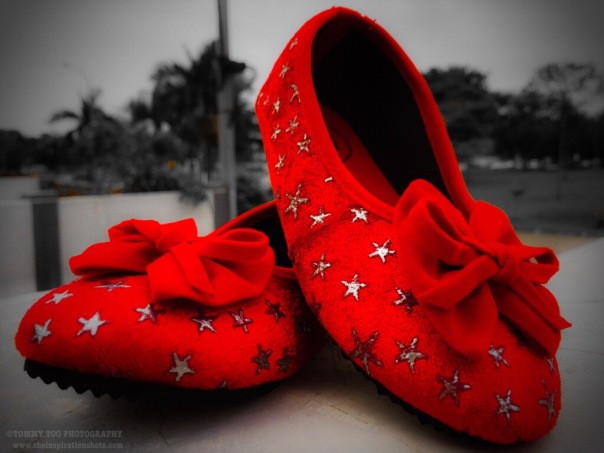