Stick For The Lip

Lipstick is a cosmetic products containing pigments, oils, waxes, and emollients that apply color, texture, and protection to the lips.

Many colors and types of lipstick exist. As with most other types of makeup, lipstick is typically, but not exclusively, worn by women. The use of lipstick dates back to medieval times. Some lipsticks are also lip balms, to add color and hydration.

Ancient Sumerian men and women were possibly the first to invent and wear lipstick, about 5,000 years ago. They crushed gemstones and used them to decorate their faces, mainly on the lips and around the eyes. Also Egyptians like Cleopatra crushed bugs to create a colour of red on their lips. Also around 3000 BC to 1500 BC, women in the ancient Indus Valley Civilization applied red tinted lipstick to their lips for face decoration. Ancient Egyptians wore lipstick to show social status rather than gender. They extracted the red dye from fugus-algin, 0.01% iodine, and some bromine mannite, but this dye resulted in serious illness. Lipsticks with shimmering effects were initially made using a pearlescent substance found in fish scales.

During the Islamic Golden Age the notable Andalusian cosmetologist Abu al-Qasim al-Zahrawi (Abulcasis) invented solid lipsticks, which were perfumed sticks rolled and pressed in special molds, and he described them in his Al-Tasrif.

In Australia girls would paint their mouths red with ocher for puberty rituals.

During the Second World War, metal lipstick tubes were replaced by plastic and paper tubes. Lipstick was scarce during that time because some of the essential ingredients of lipstick, petroleum and castor oil, were unavailable. World War II allowed women to work in engineering and scientific research, and in the late 1940s, Hazel Bishop, an organic chemist in New York and New Jersey, created the first long lasting lipstick, called No-Smear lipstick. With the help of Raymond Specter, an advertiser, Bishop’s lipstick business thrived.

Another form of lip color, a wax-free, semi-permanent liquid formula, was invented in the 1990s by the Lip-Ink International company. Other companies have imitated the idea, putting out their own versions of long-lasting “lip stain” or “liquid lip colour.” 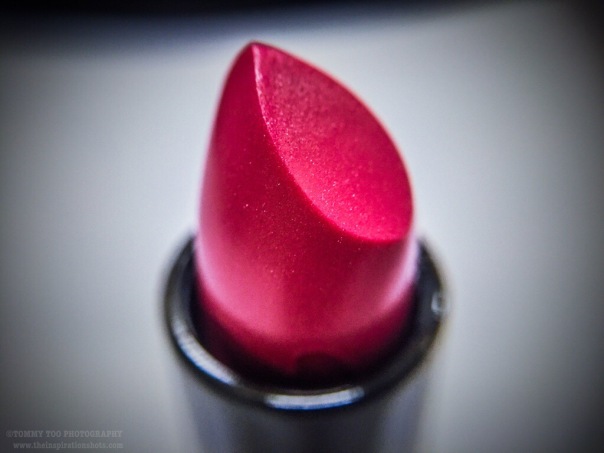 Posted on May 25, 2016, in iPhoneOgraphy 366, Photography and tagged #iphone6plus, #iphoneography366, #photography, lipstick. Bookmark the permalink. Leave a comment.