A marble is a small spherical toy usually made from glass, clay, steel, plastic or agate. These balls vary in size. Most commonly, they are about 1/2 inch to 1 inch (1.3 to 2.54 cm) in diameter, but they may range from less than 1/30 inch (0.111 cm) to over 3 inches (7.75 cm), while some art glass marbles for display purposes are over 12 inches (30 cm) wide. Marbles can be used for a variety of games called marbles. They are often collected, both for nostalgia and for their aesthetic colors. In the North of England the objects and the game are called “taws”, with larger taws being called bottle washers after the use of a marble in Codd-neck bottles.

Various balls of stone were found on excavation near Mohenjo-daro. Marbles are also often mentioned in Roman literature, like Ovid’s poem Nux about nuts playing and there are many examples of marbles from Chaldeans of Mesopotamia and ancient Egypt. They were commonly made of clay, stone or glass.

Marbles were first manufactured in Germany in the 1800s. The game has become popular throughout the US and other countries.

A German glassblower invented marble scissors in 1846, a device for making marbles. The first mass-produced toy marbles (clay) made in the U.S. were made in Akron, Ohio, by S. C. Dyke, in the early 1890s. Some of the first U.S.-produced glass marbles were also made in Akron, by James Harvey Leighton. In 1903, Martin Frederick Christensen—also of Akron, Ohio—made the first machine-made glass marbles on his patented machine. His company, The M. F. Christensen & Son Co., manufactured millions of toy and industrial glass marbles until they ceased operations in 1917. The next U.S. company to enter the glass marble market was Akro Agate. This company was started by Akronites in 1911, but was located in Clarksburg, West Virginia. Today, there are only two American-based toy marble manufacturers: Jabo Vitro in Reno, Ohio, and Marble King, in Paden City, West Virginia. 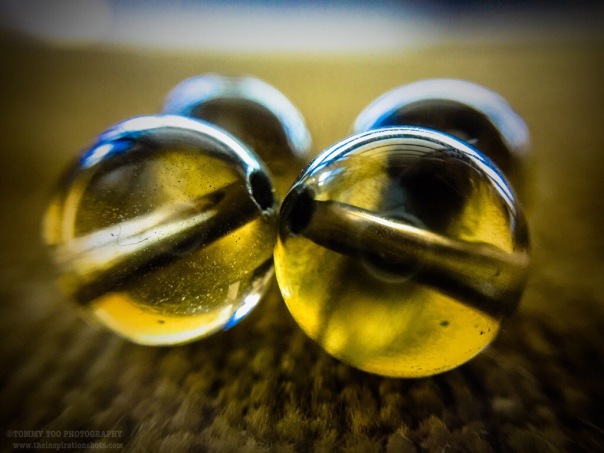 Posted on May 30, 2016, in iPhoneOgraphy 366, Photography and tagged #iphone6plus, #iphoneography366, #photography, marbles. Bookmark the permalink. Leave a comment.