Theatre’s On The Bay

Esplanade – Theatre’s on the Bay, also known as the Esplanade Theatre or simply The Esplanade, is a 60,000 square metres (6.0 ha) performing arts center located in Marina Bay near the mouth of the Singapore River. Named after the nearby Esplanade Park, it consists of a concert hall which seats about 1,800 and a theatre with a capacity of about 2,000 for the performing arts.

In 1989, the Advisory Council on Culture and the Arts, chaired by Deputy Prime Minister Ong Teng Cheong, produced a report assessing the status of arts in Singapore. The report would form the blueprint for cultural policy in Singapore, and led to the establishment of the National Arts Council and National Heritage Board. The report noted a lack of suitable performance arts venues; for example, Victoria Theatre was deemed only suitable for small to medium-sized performances, while Victoria Concert Hall was similarly lacking in its seating capacity and stage size. It recommended that a new performing arts centre be built, and in 1992 the Singapore Arts Centre (now known as “Esplanade Co Ltd”) was established to build the Esplanade.

The name for the centre was revealed in 1994. It was named after Esplanade due to its significant presence in the Esplanade Park.

Planning for the construction of the centre started in 1992, headed by the Singapore Arts Centre Co. Construction officially started on August 11, 1996, with a groundbreaking ceremony officiated by then Deputy Prime Minister Dr. Tony Tan. The Esplanade occupies the site of the former “Satay Club”, a popular food haunt for Singaporeans which had been discontinued prior to the Esplanade’s construction. The “Satay Club” had been relocated next to Sembawang Shopping Center, before closing down.

The Esplanade was developed at a cost of about SGD 600 million. It was completed in February 2001, the centre was officially opened on 12 October 2002, by the then President of Singapore S.R. Nathan.

The building was designed by two architectural firms working in conjunction: by DP Architects (DPA) of Singapore and the London-based Michael Wilford & Partners (MWP), although the latter left the project in May 1995. The design consists of two rounded space frames fitted with triangulated glass elements and sunshades, which balance outward views with solar shading.

The original design, presented to the public in 1994, consisted of unadorned glass cases over the theatres, and initially elicited criticisms from the public, including calling it “two copulating aardvarks”. Critics also accused that the design is insensitive to Singapore’s location and climate as it would have created a greenhouse in the tropical climate of Singapore, but according to DPA director Vikas Gore some form of shading was always intended, and a cladding of aluminium sunshades was added to the final design. The unique architectural design has been said to have an appearance similar to either a durian (a tropical fruit) or the eyes of a fly. Hence, the building is colloquially known to locals as “the big durians”. 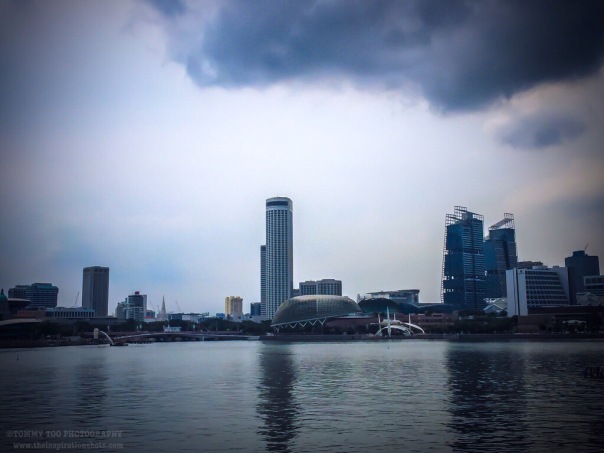