Fuel dispensers are used to pump petrol/gasoline, diesel, Compressed natural gas, CGH2, HCNG, LPG, Liquid hydrogen, kerosene, alcohol fuel (like methanol, ethanol, butanol, propanol), biofuels (like straight vegetable oil, biodiesel), or other types of fuel into the tanks within vehicles and calculate the financial cost of the fuel transferred to the vehicle. Fuel dispensers are also known as bowsers (in some parts of Australia), petrol pumps (in most Commonwealth countries) or gas pumps (in North America). Besides fuel dispensers, one other significant device which is also found in filling stations and can refuel certain (compressed-air) vehicles is an air compressor, although generally these are just used to inflate car tyres. Also, many filling stations incorporate a convenience store, which like most other buildings generally have electricity sockets; hence plug-in electric vehicles can be recharged.

The term “gas station” is widely used in the United States, Canada and the English-speaking Caribbean, where the fuel is known as “gasoline” or “gas” as in “gas pump”. In some regions of Canada, the term “gas bar” is used. Elsewhere in the English-speaking world, mainly in the Commonwealth, the fuel is known as “petrol”, and the term “petrol station” or “petrol pump” is used. In the United Kingdom and South Africa “garage” is still commonly used. Similarly, in Australia, the term “service station” (“servo”) describes any petrol station. In Japanese English, it is called a “gasoline stand”. In Indian English, it is called a petrol pump or a petrol bunk. In some regions of America and Australia, many filling stations have a mechanic on duty, but this is uncommon in other parts of the world.

The first places that sold gasoline were pharmacies, as a side business. The first filling station was the city pharmacy in Wiesloch, Germany, where Bertha Benz refilled the tank of the first automobile on its maiden trip from Mannheim to Pfirzheim and back in 1888. Since 2008 the Bertha Benz Memorial Route commemorates this event.

The increase in automobile ownership after Henry Ford started to sell automobiles that the middle class could afford resulted in an increased demand for filling stations. The world’s first purpose built gas station was constructed in St.Louis, Missouri in 1905 at 420 S. Theresa Avenue. The second gas station was constructed in 1907 by Standard Oil of California (now Chevron) in Seattle, Washington at what is now Pier 32. Reighard’s Gas Station in Altoona, Pennsylvania claims that it dates from 1909 and is the oldest existing gas station in the United States. Early on, they were known to motorists as “filling stations”. The first “drive-in” filling station, Gulf Refining Company, opened to the motoring public in Pittsburgh on December 1, 1913 at Baum Blvd & St Clair’s Street (Walter’s Automotive Shop was located here on the 100th anniversary). Prior to this, automobile drivers pulled into almost any general or hardware store, or even blacksmith shops in order to fill up their tanks. On its first day, the station sold 30 gallons of gasoline at 27 cents per gallon. This was also the first architect-designed station and the first to distribute free road maps. The first alternative fuel station was opened in San Diego, California by Pearson Fuels in 2003. 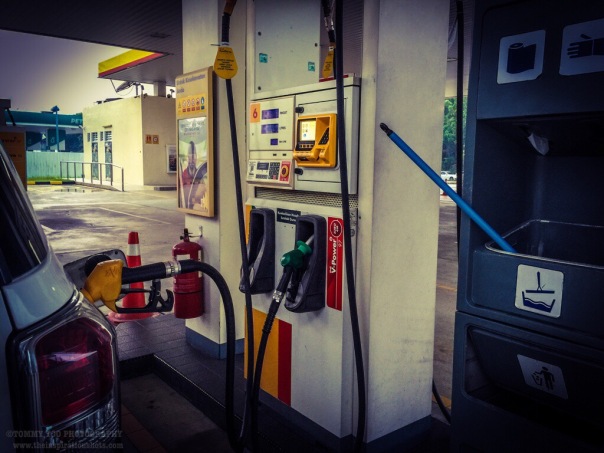