In 1812, British inventor Sir William Congreve patented a manual sprinkler system using perforated pipes along the ceiling. When someone noticed a fire, a valve outside the building could be opened to send water through the pipes.

A large furniture factory had repeatedly burned down, and Hiram Stevens Maxim was consulted on how to prevent a recurrence. As a result, Maxim invented the first automatic fire sprinkler. It would douse the areas that were on fire, and it would report the fire to the fire station. Maxim was unable to sell the idea elsewhere, but when the patent expired the idea was used.

Henry S. Parmalee of New Haven, Connecticut created and installed the first automatic fire sprinkler system in 1874, using solder that melted in a fire to unplug holes in the otherwise sealed water pipes. At the time he was the president of Mathusek Piano Works. Parmelee invented his sprinkler system in response to exorbitantly high insurance rates. Parmalee patented his idea and had great success with it in the U.S. Parmalee called his invention the “automatic fire extinguisher”. He then traveled to Europe to demonstrate his method to stop a building fire before total destruction.

His invention did not get as much attention as he had planned. Most people could not afford to install a sprinkler system. Once Parmalee realized this, he turned his efforts on educating the insurance companies about his system. He talked about how the sprinkler system would reduce the loss ratio, thus saving money for the insurance companies. He knew that he could never succeed in obtaining contracts from the business owners to install his system unless he could ensure for them a reasonable return in the form of reduced premiums.

In this connection he was fortunate enough to enlist the sympathies of two men, who both had connections in the insurance industry. The first of these was Major Hesketh, who, in addition to being a cotton spinner in a large business in Bolton, was Chairman of the Bolton Cotton Trades Mutual Insurance Company. The Directors of this Company and more particularly its Secretary, Peter Kevan, took an interest in Parmalee’s early experiments. Hesketh got Parmalee his first order for sprinkler installations in the cotton spinning mills of John Stones & Company, at Astley Bridge, Bolton, followed soon afterwards by an order from the Alexandra Mills, owned by John Butler of the same town.

Although Parmalee got two sales through its efforts, the Bolton Cotton Trades Mutual Insurance Company was not a very big company outside of its local area. Parmalee needed a wider influence. He found this influence in James North Lane, the Manager of the Mutual Fire Insurance Corporation of Manchester. This company was founded in 1870 by the Textile Manufacturers’ Associations of Lancashire and Yorkshire as a protest against high insurance rates. They had a policy of encouraging risk management and more particularly the use of the most up-to-date and scientific apparatus for extinguishing fires. Even though he put tremendous effort and time into educating the masses on his sprinkler system, by 1883 only about 10 factories were protected by the Parmalee sprinkler.

Back in the U.S., Frederick Grinnell, who was manufacturing the Parmalee sprinkler, designed the more effective Grinnell sprinkler. He increased sensitivity by removing the fusible joint from all contact with the water, and, by seating a valve in the center of a flexible diaphragm, he relieved the low-fusing soldered joint of the strain of water pressure. By this means the valve seat was forced against the valve by the water pressure, producing a self-closing action, so that the greater the water pressure, the tighter the valve. The flexible diaphragm had a further and most important function. It caused the valve and its seat to move outwards simultaneously until the solder joint was completely severed. Grinnell got a patent for his version of the sprinkler system. He also took his invention to Europe, where it was a much bigger success than the Parmalee version. Eventually, the Parmalee system was withdrawn, which left an open path for Grinnell and his invention. 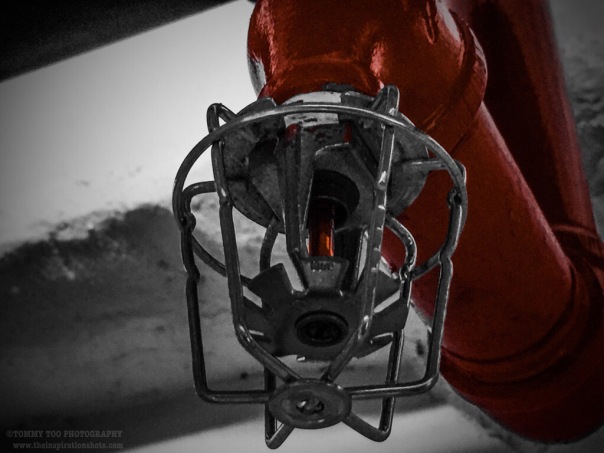