Chain drive is a way of transmitting mechanical power from one place to another. It is often used to convey power to the wheels of a vehicle, particularly bicycles and motorcycles. It is also used in a wide variety of machines besides vehicles.

Most often, the power is conveyed by a roller chain, known as the drive chain or transmission chain, passing over a sprocket gear, with the teeth of the gear meshing with the holes in the links of the chain. The gear is turned, and this pulls the chain putting mechanical force into the system. Another type of drive chain is the Morse chain, invented by the Morse Chain Company of Ithaca, New York, United States. This has inverted teeth.

Sometimes the power is output by simply rotating the chain, which can be used to lift or drag objects. In other situations, a second gear is placed and the power is recovered by attaching shafts or hubs to this gear. Though drive chains are often simple oval loops, they can also go around corners by placing more than two gears along the chain; gears that do not put power into the system or transmit it out are generally known as idler-wheels. By varying the diameter of the input and output gears with respect to each other, the gear ratio can be altered. For example, when the bicycle pedals’ gear rotate once, it causes the gear that drives the wheels to rotate more than one revolution.

The oldest known application of a chain drive appears in the Polybolos, a repeating crossbow described by the Greek engineer Philon of Byzantium (3rd century BC). Two flat-linked chains were connected to a windlass, which by winding back and forth would automatically fire the machine’s arrows until its magazine was empty.

Although the device did not transmit power continuously since the chains “did not transmit power from shaft to shaft, and hence they were not in the direct line of ancestry of the chain-drive proper”, the Greek design marks the beginning of the history of the chain drive since “no earlier instance of such a cam is known, and none as complex is known until the 16th century.” It is here that the flat-link chain, often attributed to Leonardo da Vinci, actually made its first appearance.”

The first continuous and endless power-transmitting chain was depicted in the written horological treatise of the Song Dynasty (960-1279) Chinese engineer Su Song (1020-1101 AD), who used it to operate the armillary sphere of his astronomical clock tower as well as the clock jack figurines presenting the time of day by mechanically banging gongs and drums. The chain drive itself was given power via the hydraulic works of Su’s water clock tank and waterwheel, the latter which acted as a large gear. 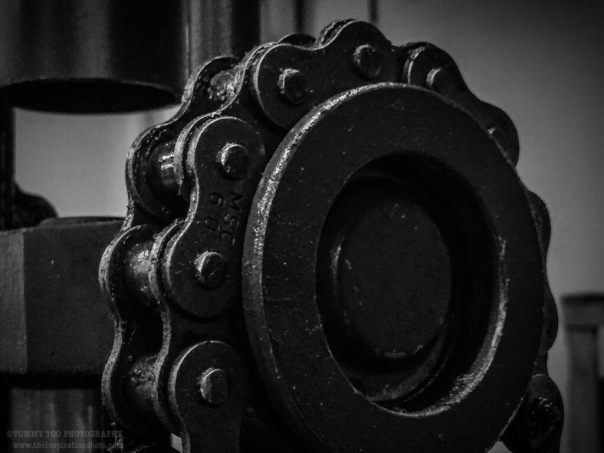