A crêpe or crepe is a type of very thin pancake, usually made from wheat flour (crêpes de froment) or buckwheat flour (galettes). The word is of French origin, deriving from the Latin crispa, meaning “curled”. While crêpes are often associated with Brittany, a region in the northwest of France, their consumption is widespread in France, Belgium, Quebec and many parts of Europe, North Africa and the Southern Cone of South America. Crêpes are served with a variety of fillings, from the simplest with only sugar to flambéed crêpes Suzette or elaborate savoury galettes.

Crêpes are made by pouring a wheat batter onto a frying pan or flat circular hot plate, often with a trace of butter or vegetable oil on the pan’s surface. The batter is spread evenly over the cooking surface of the pan or plate either by tilting the pan or by distributing the batter with an offset spatula or trowel. The consistency of the batter should not be too thick, nor should the pan be too hot. In either of these instances, the crêpe could be ruined with lumpiness or tears. Cooking may take 30 to 60 seconds until the cooked side looks like the surface of the moon, then it is turned over to cook the other side; one can flip it in the air by swinging the pan (air flipping).

Because the outside of the crêpe is more attractive, they are typically never served inside out.

Sweet crêpes are generally made with wheat flour, while savory crêpes are made with non-wheat flours such as buckwheat. Batters can also consist of other simple ingredients such as butter, milk, water, eggs, flour, salt, and sugar.

Common savoury fillings for crêpes served for lunch or dinner are cheese, ham, and eggs, ratatouille, mushrooms, artichoke (in certain regions), and various meat products. The fillings are commonly added to the center of the crêpe and served with the edges partially folded over the center.

When sweet, they can be eaten as part of breakfast or as a dessert. They can be filled and topped with various sweet toppings, often including Nutella spread, preserves, sugar (granulated or powdered), maple syrup, lemon juice, whipped cream, fruit spreads, custard, and sliced soft fruits or confiture.

Crêpes are especially popular throughout France. The common ingredients include flour, eggs, milk, butter, and a pinch of salt. Crêpes are usually of two types: sweet crêpes (crêpes sucrées) made with wheat flour and slightly sweetened; and savoury galettes (crêpes salées) made with buckwheat flour and unsweetened. The name “galette” came from the French word galet (“pebble”), since the first gallettes were made on a large pebble heated in a fire. Batter made from buckwheat flour is gluten-free, which makes it possible for people who have a gluten allergy or intolerance to eat this type of crêpe. Mille crêpes is a French cake made of many crêpe layers. The word mille means “a thousand”, implying the many layers of crêpe. Another standard French and Belgian crêpe is the crêpe Suzette, a crêpe with lightly grated orange peel and liqueur (usually Grand Marnier) which is subsequently lit upon presentation.

Swedish pancakes, also called Nordic pancakes, are similar to the French crêpes. In some of the Nordic countries they are served with jam or fruit, especially lingonberries (or the butter from that fruit) as a dessert with a variety of savory fillings. Traditional Swedish variations can be exotic. Beside the usual thin pancakes, called pannkakor in Swedish and räiskäle in Finnish, which resemble the French crêpes and, often served with whipped cream and jam, are traditionally eaten for lunch on Thursdays with pea soup, the Swedish cuisine (as well as the Finnish one) has plättar/lettu which resemble tiny English pancakes, and are fried several at a time in a special pan. Others resemble German pancakes but include fried pork in the batter (fläskpannkaka); these are baked in the oven. Potato pancakes called raggmunk contain shredded raw potato, and may contain other vegetables (sometimes the pancake batter is omitted, producing rårakor). Raggmunk and rårakor are traditionally eaten with pork rinds and lingonberry jam. A special Swedish pancake is saffron pancake from Gotland, made with saffron and rice, baked in the oven. It is common to add lemon juice to the sugar for extra taste. The pancakes are often served after a soup. Another special “Swedish pancake” is the äggakaka (eggcake), also called skånsk äggakaka (scanian eggcake), it is almost like an ordinary Swedish pancake but it is a lot thicker and also a lot more difficult to make due to the risk of burning it. It is made in a frying pan and is about 1½ to 2 inches thick and is served with lingonberries and bacon. The Norwegian variety is commonly eaten for dinner, traditionally with bacon, jam (typically bilberry jam) or sugar.

The 49er flapjack is a sourdough crepe which is popular in the United States, getting its name from the popularity of this style of pancake during the California Gold Rush. Because it is similar to a Swedish pancake the 49er is sometimes served with lingonberry sauce, although most often it is rolled up with butter and powdered sugar, or served open faced and topped with maple syrup.

Cherry Kijafa Crêpes are also often common and are made with a traditional crêpe base, but filled with cherries simmered in a Kijafa wine sauce.

Crêpe dentelle is a crispy biscuit made with a very thin layer of crêpe folded in a cigar shape and then baked. It is usually enjoyed with a hot drink during the goûter, in France.

In France, crêpes are traditionally served on Candlemas (La Chandeleur), 2 February. This day was originally Virgin Mary’s Blessing Day, but became known in France as “Le Jour des Crêpes” (literally translated “The Day of the Crêpes”, but sometimes given colloquially as “Avec Crêpe Day” or “National Crêpe Day”), referring to the tradition of offering crêpes. The belief was that if you could catch the crêpe with a frying pan after tossing it in the air with your right hand and holding a gold coin in your left hand, you would become rich that year. The roundness, and golden color from being fried in butter, of the crêpe resembles the sun and its rays. This symbolism also applies to the coin held in the person’s hand. 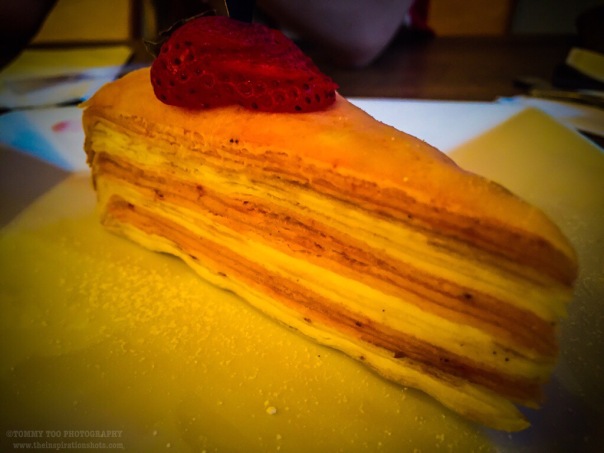