Manatees (family Trichechidae, genus Trichechus) are large, fully aquatic, mostly herbivorous marine mammals sometimes known as sea cows. There are three accepted living species of Trichechidae, representing three of the four living species in the order Sirenia: the Amazonian manatee (Trichechus inunguis), the West Indian manatee (Trichechus manatus), and the West African manatee (Trichechus senegalensis). They measure up to 4.0 metres (13.1 ft) long, weigh as much as 590 kilograms (1,300 lb), and have paddle-like flippers. The name manatí comes from the Spanish “manatí”, derived from the Caribbean word sometimes cited as “manattouï”. The etymology is dubious, with connections having been made to Latin “manus” (hand), and to a word used by the Taíno, a pre-Columbian people of the Caribbean, meaning “breast”.

Manatees comprise three of the four living species in the order Sirenia. The fourth is the Eastern Hemisphere’s dugong. The Sirenia are thought to have evolved from four-legged land mammals over 60 million years ago, with the closest living relatives being the Proboscidea (elephants) and Hyracoidea (hyraxes).

The Amazonian’s hair color is brownish gray, and they have thick wrinkled skin often with coarse hair, or “whiskers”. Photos are rare; although very little is known about this species, scientists think they are similar to West Indian manatees.

Manatees have a mass of 400 to 550 kilograms (880 to 1,210 lb), and mean length of 2.8 to 3.0 metres (9.2 to 9.8 ft), with maxima of 3.6 metres (12 ft) and 1,775 kilograms (3,913 lb) seen (the females tend to be larger and heavier). When born, baby manatees have an average mass of 30 kilograms (66 lb). They have a large, flexible, prehensile upper lip. They use the lip to gather food and eat, as well as using it for social interactions and communications. Manatees have shorter snouts than their fellow sirenians, the dugongs. Their small, widely spaced eyes have eyelids that close in a circular manner. The adults have no incisor or canine teeth, just a set of cheek teeth, which are not clearly differentiated into molars and premolars. These teeth are continuously replaced throughout life, with new teeth growing at the rear as older teeth fall out from farther forward in the mouth. This process is known as polyphyodonty and amongst the other mammals, only occurs in the kangaroo and elephant. At any given time, a manatee typically has no more than six teeth in each jaw of its mouth. Its tail is paddle-shaped, and is the clearest visible difference between manatees and dugongs; a dugong tail is fluked, similar in shape to a that of a whale. Females have two teats, one under each flipper, a characteristic that was used to make early links between the manatee and elephants.

Like horses, they have a simple stomach, but a large cecum, in which they can digest tough plant matter. In general, their intestines have a typical length of about 45 meters, which is unusually long for animals of their size. Manatees produce enormous amounts of gas, which contributes to their barrel-shape, to aid in the digestion of their food.

Manatees are the only animal known to have a vascularized cornea. 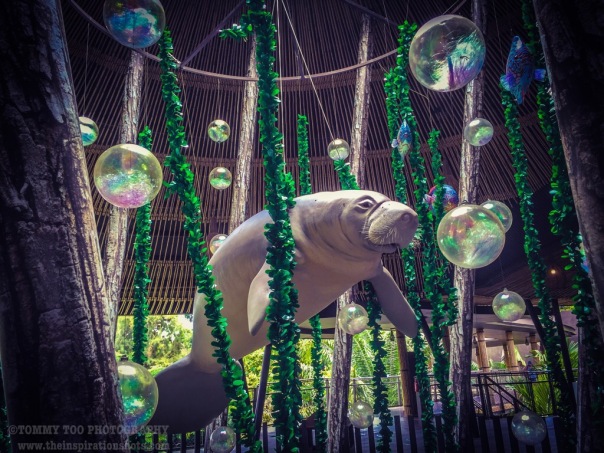