Morelia spilota, commonly referred to as carpet python and diamond pythons, is a large snake of the family Pythonidae found in Australia, New Guinea (Indonesia and Papua New Guinea), Bismarck Archipelago, and the northern Solomon Islands.

Morelia spilota is a large species of python in the genus, reaching between 2 to 4 metres (6.6 to 13.1 ft) in length and weighing up to 15 kilograms (33 lb). M. s. mcdowelli is the largest subspecies, regularly attaining lengths of 2.7–3 m (8.9–9.8 ft). M. s. variegata is the smallest subspecies, averaging 120–180 cm (3.9–5.9 ft) in length. The average adult length is roughly 2 metres (6.6 ft). However, one 3-year-old captive male M. s. mcdowelli, measured in Ireland, was found to exceed 396 cm (12.99 ft). Males are typically smaller than females; in some regions females are up to four times heavier. The head is triangular with a conspicuous row of thermoreceptive labial pits.

The colouring of Morelia spilota is highly variable, ranging from olive to black with white or cream and gold markings. The patterning may be roughly diamond shaped or have intricate markings made up of light and dark bands on a background of gray or a version of brown.

Described as semi-arboreal, they are largely nocturnal, climbing trees and shrubs as well as crossing open areas such as rock faces, forest floors and even roads. However, basking behaviour is commonly observed.

Occurs in a wide variety of habitats, from the rainforests of northeastern Queensland (M. s. cheynei) through the River Red Gum/Riverbox woodlands of the Murray and Darling Rivers (M. s. metcalfei), to the arid, treeless islands of the Nuyts Archipelago off the South Australian west coast (M. s. imbricata). They are often found near human habitation where they perform a useful service by eating rats and other vermin. Morelia spilota is known to occur in areas that receive snowfall. Morelia spilota are (semi-arboreal) tree snakes; they do not completely rely on trees, however, and are capable of moving around elsewhere. Morelia spilota are also found in temperate grasslands with hot and dry weather.

The first description of Morelia spilota was by Lacépède (1804), who placed it in the genus Coluber as Coluber spilotus. The species has since been described by various authors as containing a number of subspecies and hybrids, these have also been known by various informal names. The attempted arrangement of taxa in this, and other, Australasian Pythonidae has produced numerous synonyms. The discrete and roaming habits of this species have produced a low number of recorded specimens, giving inadequate sample numbers to support descriptions of a taxon’s morphology. This is the case with proposed names which are sometimes cited, such as the Papuan Morelia spilota harrisoni (Hoser), despite being unaccepted or invalid. Common names are regional variants of carpet and diamond python or snake. 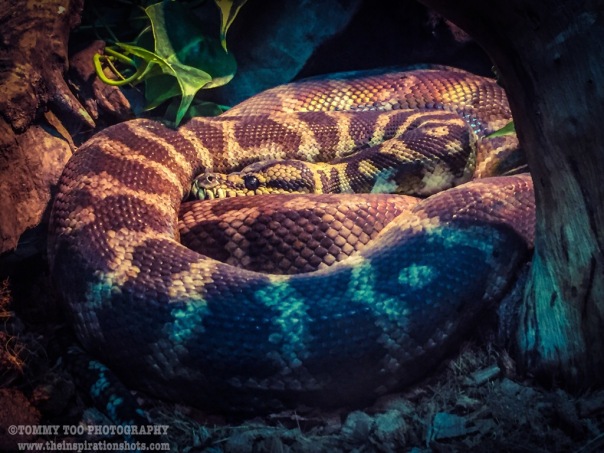