Crotalus atrox, the western diamondback rattlesnake, is a venomous rattlesnake species found in the United States and Mexico. It is likely responsible for the majority of snakebite fatalities in northern Mexico and the second-greatest number in the U.S., after C. adamanteus. No subspecies is currently recognized.

Adults commonly grow to 120 cm (4 ft) in length. Specimens over 150 cm (5 ft) are infrequently encountered, while those over 180 cm (6 ft) are very rare. The maximum reported length considered to be reliable is 213 cm (7 ft). Males become much larger than females, although this difference in size does not occur until after they have reached sexual maturity. Rattlesnakes of this species considered medium-sized weighed 1.8 to 2.7 kg (4 to 6 lb), while very large specimens can reportedly weigh up to 6.7 kg (15 lb).

The color pattern generally consists of a dusty-looking gray-brown ground color, but it may also be pinkish-brown, brick red, yellowish, pinkish, or chalky white. This ground color is overlaid dorsally with a series of 24-25 dorsal body blotches that are dark gray-brown to brown in color. The first of these may be a pair of short stripes that extend backwards to eventually merge. Some of the first few blotches may be somewhat rectangular, but then become more hexagonal and eventually take on a distinctive diamond shape hence the name “Diamondback rattlesnake” . The tail has two to eight (usually four to six) black bands separated by ash white or pale gray interspaces; this led to the nickname of “coon tail”, though other species (e.g. Mojave rattlesnake) have similarly banded tails. Its postocular stripe is smoky gray or dark gray-brown and extends diagonally from the lower edge of the eye across the side of the head. This stripe is usually bordered below by a white stripe running from the upper preocular scale down to the supralabial scales just below and behind the eye. Its off-white belly is usually unmarked, its anal scale is undivided, and its dorsal scales are extremely keeled, often in rows of 25 to 27 near the midbody.

C. atrox are solitary except during the mating season. Usually inactive between late October and early March, occasionally these ectotherms may be seen basking in the sun on warm winter days. In the winter, they hubernate or brumate in caves or burrows, sometimes with many other species of snakes. Life expectancy is more than 20 years.

They are poor climbers. Natural predators include raptors such as hawks, eagles, roadrunners, wild hogs, and other snakes. When threatened, they usually coil and rattle to warn aggressors. They are one of the more aggressive rattlesnakes in the US in the way that they stand their ground when confronted by a foe. If rattling does not work, then the snake will strike in defense. 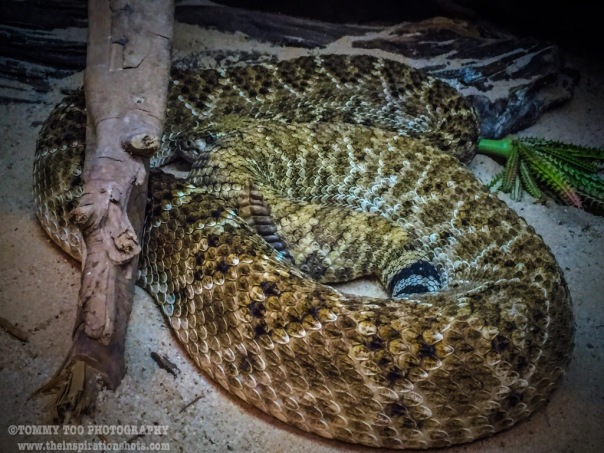