The pomegranate, botanical name Punica granatum, is a fruit-bearing deciduous shrub or small tree in the family Lythraceae that grows between 5 and 8 m (16 and 26 ft) tall.

The fruit is typically in season in the Northern Hemisphere from September to February, and in the Southern Hemisphere from March to May. As intact arils or juice, pomegranates are used in baking, cooking, juice blends, meal garnishes, smoothies, and alcoholic beverages, such as cocktails and wine.

The pomegranate originated in the region of modern-day Iran, and has been cultivated since ancient times throughout the Mediterranean region and northern India. It was introduced into Spanish America in the late 16th century and California, by Spanish settlers, in 1769.

Today, it is widely cultivated throughout the Middle East and Caucasus region, north and tropical Africa, the Indian subcontinent, Central Asia, the drier parts of Southeast Asia, and parts of the Mediterranean Basin. It is also cultivated in parts of Arizona and California. In recent years, it has become more common in the commercial markets of Europe and the Western Hemisphere.

The name pomegranate derives from Medieval Latin pōmum “apple” and grānātum “seeded”. Perhaps stemming from the old French word for the fruit, pomme-grenade, the pomegranate was known in early English as “apple of Grenada” – a term which today survives only in heraldic blazons. This is a folk etymology, confusing the Latin granatus with the name of the Spanish city of Granada, which derives from Arabic.

Garnet derives from Old French grenat by metathesis, from Medieval Latin granatum as used in a different meaning “of a dark red color”. This derivation may have originated from pomum granatum, describing the color of pomegranate pulp, or from granum, referring to “red dye, cochineal”.

The French term for pomegranate, grenade, has given its name to the military grenade. 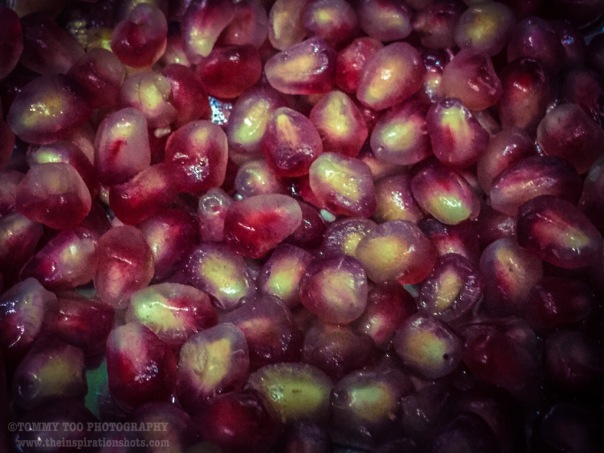