Christmas On A Great Street

Christmas Lights (also known informally as fairy lights) are lights used for decoration in preparation for Christmas and for display throughout Christmastide. The custom goes back to the use of candles to decorate the Christmas tree in Christian homes in early modern Germany. Christmas trees displayed publicly and illuminated with electric lights became popular in the early 20th century. By the mid-20th century, it became customary to display strings of electric lights as along streets and on buildings Christmas decorations detached from the Christmas tree itself. In the United States, it became popular to outline private homes with such Christmas lights in tract housing beginning in the 1960s. By the late 20th century, the custom had also been adopted in non-western countries / regions, notably in Japan and Hong Kong.

In many countries, such as Sweden, people start to set up their Christmas lights, as well as other Christmas decorations, on the first day of Advent. In the Western Christian world, the two traditional days when Christmas lights are removed are Twelfth Night and Candlemas, the latter of which ends the Christmas-Epiphany season in some denominations. Leaving the decorations up beyond Candlemas is historically considered to be inauspicious.

Christmas light sculptures, also called motifs, are used as Christmas decorations and for other holidays. Originally, these were large wire frame metal work pieces made for public displays, such as for a municipal government to place on utility poles, and shopping centers to place on lampposts. Since the 1990s, these are also made in small plastic home versions that can be hung in a window, or on a door or wall. Framed motifs can be lit using mini lights or ropelight, and larger scale motifs and sculptures may use C7 bulbs.

Light sculptures can be either flat (most common) or three-dimensional. Flat sculptures are the motifs, and are often on metal frames, but garland can also be attached to outdoor motifs. Indoor motifs often have a multicolored plastic backing sheet, sometimes holographic. 3D sculptures include deer or reindeer (even moose) in various positions, and with or without antlers, often with a motor to move the head up and down or side to side as if grazing. These and other 3D displays may be bare-frame, or be covered with garland, looped and woven transparent plastic cord or acrylic, or natural or gold tone-painted vines. Snowflakes are a popular design for municipal displays, so as not to be misconstrued as a government endorsement of religion, or so they can be left up all winter.

Some places make huge displays of these during December, such as Calloway Gardens, Life University, and Lake Lanier Islands in the U.S. state of Georgia. In East Tennessee, the cities of Chattanooga, Sevierville, Pigeon Forge, and Gatlinburg have light sculptures up all winter. Gatlinburg also has custom ones for Valentine’s Day and St. Patrick’s Day, while Pigeon Forge puts flowers on its tall lampposts for spring, and for winter has a steamboat and the famous picture of U.S. Marines Raising the Flag on Iwo Jima, in addition to the city’s historic Old Mill.

Some sculptures have micro controllers that sequence circuits of lights, so that the object appears to be in motion. This is used for things such as snowflakes falling, Santa Claus waving, a peace dove flapping its wings, or train wheels rolling. 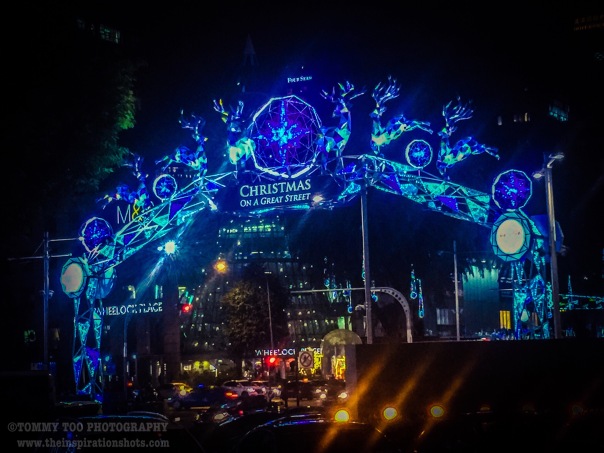