A torii (鳥居, literally bird abode) is a traditional Japanese gate most commonly found at the entrance of or within a Shinto shrine, where it symbolically marks the transition from the profane to the sacred. The presence of a torii at the entrance is usually the simplest way to identify Shinto shrines, and a small torii icon represents them on Japanese road maps. They are however a common sight at Japanese Buddhist temples too, where they stand at the entrance of the temple’s own shrine, called chinjusha (鎮守社, tutelary god shrine) and are usually very small.

Torii were traditionally made from wood or stone, but today they can be also made of reinforced concrete, copper, stainless steel or other materials. They are usually either unpainted or painted vermilion with a black upper lintel. Inari shrines typically have many torii because those who have been successful in business often donate in gratitude a torii to Inari, kami of fertility and industry. Fushimi Inari-taisha in Kyoto has thousands of such torii, each bearing the donor’s name.

The Japanese torii is derived from the Indian Torana which also inspired the Chinese Paifang.

The function of a torii is to mark the entrance to a sacred space. For this reason, the road leading to a Shinto shrine (sandō) is almost always straddled by one or more torii, which are therefore the easiest way to distinguish a shrine from a Buddhist temple. If the sandō passes under multiple torii, the outer of them is called ichi no torii (一の鳥居, first torii). The following ones, closer to the shrine, are usually called, in order, ni no torii (二の鳥居, second torii) and san no torii (三の鳥居, third torii). Other torii can be found farther into the shrine to represent increasing levels of holiness as one nears the inner sanctuary (honden), core of the shrine. Also, because of the strong relationship between Shinto shrines and the Japanese Imperial family, a torii stands also in front of the tombs of each Emperor.

Whether torii existed in Japan before Buddhism or, to the contrary, arrived with it is, however, an open question. In the past torii must have been used also at the entrance of Buddhist temples. Even today, as prominent a temple as Osaka’s Shitennō-ji, founded in 593 by Shōtoku Taishi and the oldest state-built Buddhist temple in the world (and country), has a torii straddling one of its entrances. (The original wooden torii burned in 1294 and was then replaced by one in stone.) Many Buddhist temples include one or more Shinto shrines dedicated to their tutelary kami (“Chinjusha”), and in that case a torii marks the shrine’s entrance. Benzaiten is a syncretic goddess derived from the Indian divinity Sarasvati which unites elements of both Shinto and Buddhism. For this reason halls dedicated to her can be found at both temples and shrines, and in either case in front of the hall stands a torii. The goddess herself is sometimes portrayed with a torii on her head. Finally, until the Meiji period (1868 -1912) torii were routinely adorned with plaques carrying Buddhist sutras. The association between Japanese Buddhism and the torii is therefore old and profound.

Yamabushi, Japanese mountain ascetic hermits with a long tradition as mighty warriors endowed with supernatural powers, sometimes use as their symbol a torii.

The torii is also sometimes used as a symbol of Japan in non-religious contexts. For example, it is the symbol of the Marine Corps Security Force Regiment and the 187th Infantry Regiment, 101st Airborne Division and of other US forces in Japan. 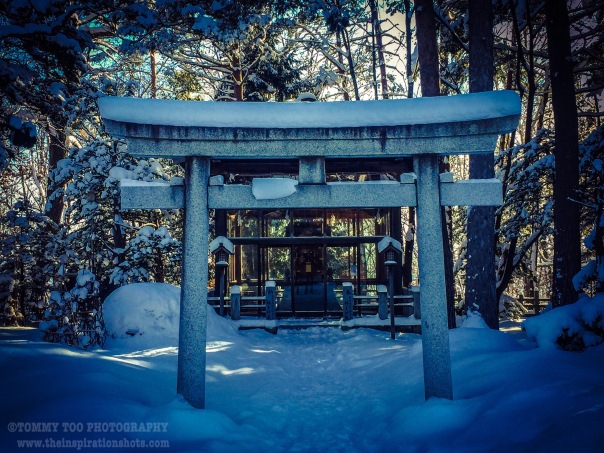