Anacondas are group of large snakes of the genus Eunectes. They are large snakes found in tropical South America. Four species are currently recognized.

Although the name applies to a group of snakes, it is often used to refer only to one species in particular, the common or green anaconda (Eunectes murinus) which is the largest snake in the world by weight, and the second longest.

The South American names anacauchoa and anacaona were suggested in an account by Peter Martyr d’Anghiera but the idea of a South American origin was questioned by Henry Walter Bates who, in his travels in South America, failed to find any similar name in use. The word anaconda is derived from the name of a snake from Ceylon (Sri Lanka) that John Rayburn described in Latin in his Synopsis Methodica Animalium (1693) as serpens indicus bubalinus anacandaia zeylonibus, ides bubalorum aliorumque jumentorum membra conterens. Ray used a catalogue of snakes from the Leyden museum supplied by Dr. Tancred Robinson, but the description of its habit was based on Andreas Cleyer who in 1684 described a gigantic snake that crushed large animals by coiling and crushing their bones. Henry Yule in his Hobson-Jobson notes that the word became more popular due to a piece of fiction published in 1768 in the Scots Magazine by a certain R. Edwin. Edwin described a tiger being crushed and killed by an anaconda when in fact tigers never occurred in Sri Lanka. Yule and Frank Wall noted that the snake was in fact a python and suggested a Tamil origin anai-kondra meaning elephant killer. A Sinhalese origin was also suggested by Donald Ferguson who pointed out that the word Henakandaya (hena lightning/large and kandastem/trunk) was used in Sri Lanka for the small whip snake (Ahaetulla pulverulenta) and somehow got misapplied to the python before myths were created.

The name commonly used for the anaconda in Brazil is sucuri, sucuriju or sucuriuba. 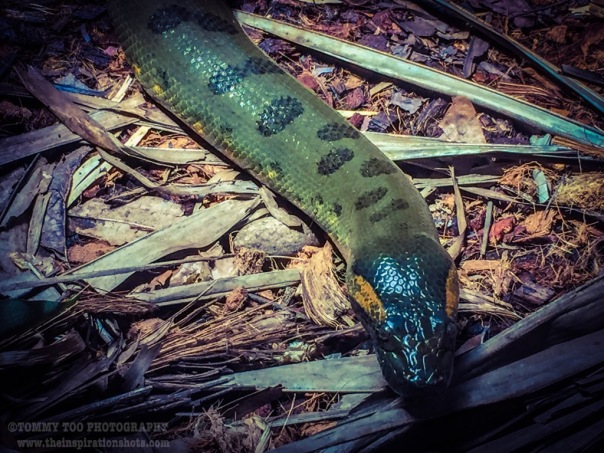