In Chinese folk religion, Chinese mythology and Taoism; The Kitchen God also known as the Stove God, named Zao Jun, Zao Shen, or Zhang Lang, is the most important of a plethora of Chinese domestic gods that protect the hearth and family. The Kitchen God is celebrated in Vietnamese culture as well. It is believed that on the twenty third day of the twelfth lunar month, just before Chinese New Year he returns to Heaven to report the activities of every household over the past year to the Jade Emperor (Yu Huang). The Jade Emperor, emperor of the heavens, either rewards or punishes a family based on Zao Jun’s yearly report. Though there are many stories on how Zao Jun became the Kitchen god, the most popular dates back to around the 2nd Century BC. Zao Jun was originally a mortal man living on earth whose name was Zhang Lang. He eventually became married to a virtuous woman, but ended up falling in love with a younger woman. He left his wife to be with this younger woman and, as punishment for this adulterous act, the heavens afflicted him with ill-fortune. He became blind, and his young lover abandoned him, leaving him to resort to begging to support himself. Once, while begging for alms, he happened across the house of his former wife. Being blind, he did not recognize her. Despite his shoddy treatment of her, she took pity on him and invited him in. She cooked him a fabulous meal and tended to him lovingly; he then related his story to her. As he shared his story, Zhang Lang became overwhelmed with self-pity and the pain of his error and began to weep. Upon hearing him apologize, Zhang’s former wife told him to open his eyes and his vision was restored. Recognizing the wife he had abandoned, Zhang felt such shame that he threw himself into the kitchen hearth, not realizing that it was lit. His former wife attempted to save him, but all she managed to salvage was one of his legs. The devoted woman then created a shrine to her former husband above the fireplace, which began Zao Jun’s association with the stove in Chinese homes. To this day, a fire poker is sometimes referred to as “Zhang Lang’s Leg”. The origin of the Kitchen god differs. Another possible story of the “Stove god” is believed to have appeared soon after the invention of the brick stove. The Kitchen god was originally believed to have resided in the stove and only later took on human form. During the Han Dynasty, it is believed that a poor farmer named Yin Zi fang, was surprised by the Kitchen god who appeared on Lunar New Year as he was cooking his breakfast. Yin Zi fang decided to sacrifice his only yellow sheep. In doing so, he became rich and decided that every winter he would sacrifice one yellow sheep in order to display his deep gratitude.

Chinese Pottery is one of the oldest in the world. Ceramics were used for making pots before bronze was invented. Vessels of clay were used mostly for rituals or for any other utility purpose. Thereafter Kilns were discovered in China. Chinese were one of the first people to use Potters wheels after a couple of years. The Neolithic Culture was developed soon after in China. Some of the Neolithic cultures are Miao-ti-kou, Lung Shan, and Yang-Shao. Various types of Vessels were used in Ancient China especially Earthenware Vessels which were usually handmade and had striations. The concept of using jars in funerals and also for pulling out drinking water from pools which were very famous in the ancient history of Asian countries was very well developed and in use in Ancient China. The Yang-Shao Water Vessels are very famous all over the world. Yang-Shao Culture was practiced in around 5000 BC and it corresponds to the modern Henan and Shanxi culture known today which was excavated in 1977. The Neolithic Culture belongs to 10,000BC. It was during this period that the Chinese Villages were first found. Introduction of different forms of art and architecture was at its peak in this period. In ancient China Pottery Carvings became very famous. The Credit of discovery of the fruitful uses of clay can be given to a great extent to Ancient China and its creativity. Different forms of Pots were made in Ancient China especially in the Ancient Chinese Villages. Different designs and motives were engraved on the pots in the Villages in Ancient Chinese Villages and sold in the Urban Markets. Chinese motives have been various famous all over the world and often the motives engraved on these pots show the ancient culture, tradition, history. It also is of a lot of evidentiary value. A few of the pots belonging to the Ancient Chinese cultures are also very important from the archaeological perspective. Although the Neolithic period was very famous however it has also come under scrutiny and dispute because of a lot of ambiguity which exists between facts and fiction. Clarification and classification between the two is very essential, however Ancient Chinese art and architecture as well as its inventions. 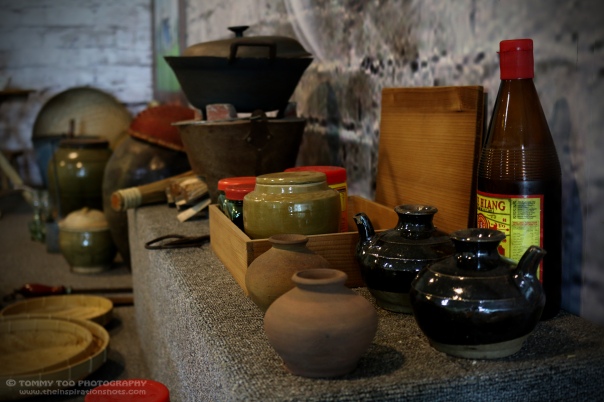