Rice (Malay: nasi) was and still is the most important staple food in Malaysia. According to Indonesian-born food and cookery writer Sri Owen, there is some evidence for rice cultivation found in the state of Sarawak in Malaysian Borneo dated 2300 BC, and about 900 years of history for the state of Kelantan in West Malaysia. Today Malaysia produces about seventy percent of the amount of rice it needs to support itself, and the rest is imported. This is a matter of policy as the government believes that national resources can be used more profitably instead of attempting to achieve self-sufficiency with rice production; the prevalent attitude is that revenue generated from its industries enables the country to import up to half the rice it needs. Nevertheless, the government is fully committed and involved in planning, allocating resources and managing subsidies for the rice farming industry. The state of Kedah is considered the “rice bowl” (Malay: jelapang padi) of the country, accounting for about half of Malaysia’s total production of rice. Plain steamed white rice, to be served with side dishes of meat or vegetables, is typically prepared with an electric rice cooker at home. Some households and food establishments prefer to cook rice on a stove top with the absorption method or the rapid-boil method. Compressed rice, called nasi himpit, is another method of preparing and cooking rice: the rice is wrapped with fronds or leaves and compressed into the form of a cylinder, which is then cooked by boiling. The rice would compress and merge during the cooking process. Compressed rice is usually eaten cold with some sort of gravy, although it may be served warm in a broth or soup. A notable variant of compressed rice prepared by the Bugis community is burasak: rice is precooked with coconut milk before it is wrapped in banana leaves and steamed until fully cooked. Besides the ubiquitous white rice, there are different types of locally grown and imported rice available in the market, and each type has a specific cooking method to bring out optimal results. Glutinous rice (Malay: pulut) is one example: because of its low amylose and high amylopectin content which results in a sticky texture after cooking, glutinous rice is prepared with different measurements and techniques and is not a suitable substitute for normal rice or vice versa. It is typically used for making snacks and desserts, but glutinous rice is also prepared as a savoury staple by indigenous peoples like the Orang Asli as well as the Dayak people of Borneo. Lemang is glutinous rice roasted in a hollowed bamboo tube, and is prepared for festive occasions like Ari Gawai, Hari Raya Aidilfitri, and Hari Raya Aidiladha. 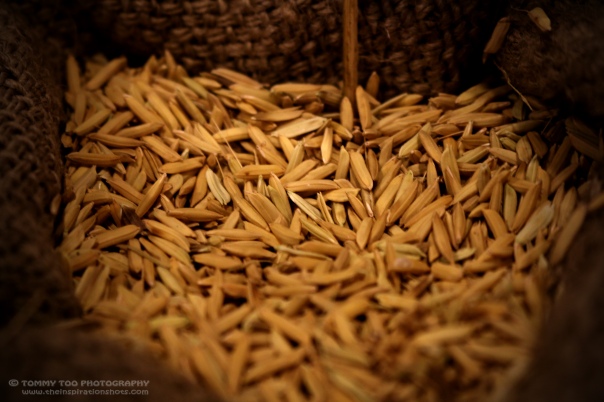