A top is a toy designed to be spun rapidly on the ground, the motion of which causes it to remain precisely balanced on its tip because of inertia. Such toys have existed since antiquity. Traditionally tops were constructed of wood, sometimes with an iron tip, and would be set in motion by aid of a string or rope coiled around its axis which, when pulled quickly, caused a rapid unwinding that would set the top in motion. Today they are often built of plastic, and modern materials and manufacturing processes allow tops to be constructed with such precise balance that they can be set in motion by a simple twist of the fingers and twirl of the wrist without need for string or rope.

The motion of a top is produced in the most simple forms by twirling the stem using the fingers. More sophisticated tops are spun by holding the axis firmly while pulling a string or twisting a stick or pushing an auger. In the kinds with an auger, an internal weight rotates, producing an overall circular motion. Some tops can be thrown, while firmly grasping a string that had been tightly wound around the stem, and the centrifugal force generated by the unwinding motion of the string will set them spinning upon touching ground.

The top is one of the oldest recognizable toys found on archaeological sites. Spinning tops originated independently in cultures all over the world. Besides toys, tops have also historically been used for gambling and prophecy. Some role-playing games use tops to augment dice in generating randomized results; it is in this case referred to as a spinner. A thumbtack may also be made to spin on the same principles.

The action of a top is described by equations of rigid body dynamics (see the section Rotation in three dimensions). Typically the top will at first wobble until the shape of the tip and its interaction with the surface force it upright. After spinning upright for an extended period, the angular momentum will gradually lessen, leading to ever increasing precession, finally causing the top to topple in a frequently violent last thrash.

There have been many developments within the technology of the top. Bearing tops, with a tip that spins, have been one of the biggest changes. In addition, plastic and metal have largely supplanted the use of wood in tops. Fixed tip tops are featured in National Championships in Chico, California and in the World Championships in Orlando, Florida. 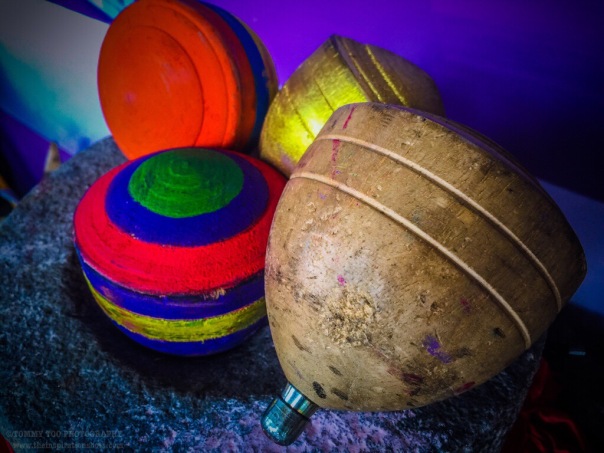